History of the Universe in One Hour

With a cosmic flight simulator, Professor Max Tegmark takes the audience on a scenic journey through space and time. After exploring the local Galactic neighborhood, he travels 13.7 billion years back to explore the Big Bang itself and describes how state-of-the-art measurements are transforming our understanding of our cosmic origin and ultimate fate. And of course, he explains parallel universes. 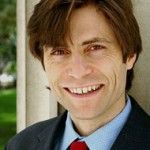 In addition to hundreds of professional articles on cosmology and innovations in data analysis, Dr. Tegmark has written a number of articles for the general public including several in Scientific American on the subject of parallel universes.

Max Tegmark has appeared in a number of programs in the BBC Horizons science series and also in the popular documentary, Parallel Worlds, Parallel Lives about the famous physicist, Hugh Everett. He appears also in the 2011 NOVA production hosted by physicist Brian Greene, The Fabric of the Cosmos.