One of the greatest theoretical physicists of our time, Paul Steinhardt is extraordinary in terms of his range and depth. In this program he discusses two of his best known research projects: first, the theory of a cyclic universe; and second, his prediction and later actual discovery of an entity thought not to occur naturally, the quasicrystal. Both of these projects are changing our view of Nature.

Cosmology. Dr. Steinhardt played a major role in developing the theory of cosmic inflation, which attempts to explain some puzzling aspects of the structure of the universe after the big bang. He introduced the concept of quintessence, a time-varying form of dark energy to explain the current accelerating expansion of the universe. And he is one of the authors of the cyclic model of the universe, which attempts to resolve the major problems of the inflationary model to which he contributed so much. His book with Neil Turok, Endless Universe makes the issues very clear for general readers. 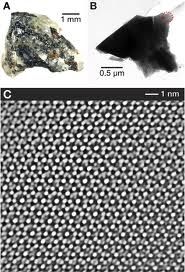 Condensed Matter Physics. Steinhardt's work in condensed matter physics includes his prediction of the quasicrystal, a novel phase of matter which has symmetries forbidden to ordinary periodic crystals. Although the quasicrystal was later synthesized in the lab, it was not expected to be found in nature. But Paul Steinhardt actually found a natural example. Dr. Steinhardt describes his amazing expedition to locate a genuine quasicrystal and also the great potential use for such structures.

article about Steinhardt's expedition to track down quasicrystal

Awards. Paul Steinhardt is a Fellow in the American Physical Society and a member of the National Academy of Sciences. He has received many awards, including the P.A.M. Dirac Medal from the International Centre for Theoretical Physics in 2002 for his contributions to inflationary cosmology and the 2010 Oliver Buckley Prize from the American Physical Society for his work on quasicrystals.

Prospecting for QuasicrystalsScience News, Nov 03, 2012: Steinhardt and colleagues track down the only known natural sample on Earth