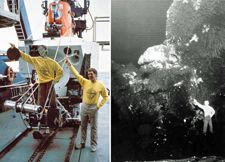 Mr. Foster began as an engineer in the early days of the Alvin at Woods Hole, and moved on to positions of pilot for the submersible, then expedition leader, then management for the WHOI Alvin expeditions. His experience and expertise were indispensable to the many technical developments associated with the Alvin. The iconic wooden cutout of Dudley beside a huge deep-sea "black smoker" vent is a favorite among scientists and colleagues at WHOI; it was used to indicate the just how huge these vents were.

In this mini-documentary, Dudley Foster describes how the scientists who explored the very deep seas on the Alvin greatly expanded marine science. We hear about the surprise finding of the deep-sea hydrothermal vents and "black smokers" --and the diversity of life at these depths. We learn about the magnetic evidence of pole-shifting marked on the bottom of the sea, and also about the famous dive to the Titanic. Mr. Foster also describes the demands of the expeditions and the technical innovations for collecting and filming deep-sea fauna and geological specimens.

As the Arctic Warms, Beavers Move In