Medicating ADHD: Diagnosis and the Long-Term Effects of the Medications

Robert Whitaker is a prominent medical writer, whose concentration is on psychiatric care and psychotropic drugs. In this presentation he provides important information about how ADHD --now an "epidemic"-- is diagnosed and why users of medications for ADHD should be cautious. Recent news stories about the hazards of long-term ADHD medications and the more general use of these drugs to enhance concentration underscore the importance of Whitaker's discussion. Robert Whitaker's Mad in America websiteRobert Whitaker's books

Two of Robert Whitaker's books on this subject are among the most cited in the literature: Mad in America (2002) and Anatomy of an Epidemic (2010). He has received numerous awards (listed below), including a George Polk Award for medical writing and a National Association of Science Writers Award for best magazine article. He was a finalist for a Pulitzer Prize in 1998.

Whitaker's work has alerted both the medical community and the general public to the serious dangers of psychotropic medicines when used for extended periods. He has become a standard reference for the facts. Robert Whitaker's Blog 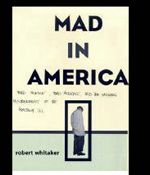 As the Arctic Warms, Beavers Move In